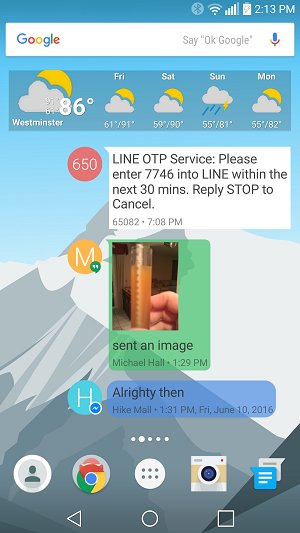 After releasing our newest app, Quick Brew Calc, we were finally ready to make our planned improvements to the messaging widgets. Continuing the features of version 2.0, this release is all about customization.

Another new feature is text size configuration. With the DPI of devices varying greatly within android, this was an important feature. So if the widget’s text was too tiny, you can now easily push it into the readable range. You can see in the screenshot, the widget looks pretty nice with slightly larger text.

The last feature we added, came from a user’s suggestion. We’ve added an optional “emblem” to the contact image which indicates the source of the message (checkout the screenshot). Now for example, WhatsApp messages can easily be distinguished from Hangouts messages.

Unfortunately this update could erase some of your current widgets’ color and message bubble customization. This is an unfortunate problem that we failed to anticipate and cannot fix. We have ensured that it will not happen again however.

As for bug fixes, we took care of one critical issue that I’m surprised no one reported to us. When opening the configuration screen on the All Messages Widget, all the sources that require a license would be turned off, even if they were turned on previously. This has been fixed for this release.

A styling bug occurred in sent SMS messages (turned on by enabling the “Show Outgoing” option). These entries did not respect the styling options at all. For this release, outgoing messages are styled just like received messages, and they look great.

Enjoy the new release! It’s rolling out now. Our next task will be to add support for new messaging apps, we have had some requests.